My travel guide to Skopje is my own personal experience during my recent trip to this beautiful capital of North Macedonia in the Balkan region of Europe. You wouldn’t believe that I covered Skopje under $50 budget. I stayed for two nights in Skopje and I found it quite fascinating. I came to Skopje from Serbia by road.

How Expensive is Skopje?

I came to Skopje by road from Serbia, the bus fare was $26, and it was a 7 hours journey which I’ve documented in another post. I had booked my hostel online using Agoda.com which only cost me $10 per day.

Hotel owner was a nice lady who give me so much respect and facilities in that little price. my hostel was located a few hundred meters away from the bus station, so I walked down there and found the hostel. It was located in city center and I could easily explore the city by walk from my hostel.

I always use Agoda.com for booking my hotel rooms and hostels, which makes my life much easier. and since, I had heard that Europe is expensive, so I went for bed space in a hostel which was much cheaper under $10 a day. in fact, it was the cheapest accommodation I found in Europe.

Transport is not expensive either. you can find taxis everywhere which will cost $5 USD per ride for a few KM. I also used local metro buses which cost less than $1 per journey. Food is was $5 per meal in a good restaurant.

How Much in Total I spent?

I just spent $50 USD for two nights in Skopje. I got hostel for $20 for two nights and then I used go out and had lunch/dinner for $5 each. Breakfast was already included in my hostel. I had a great time in Skopje for the lowest budget and I would recommend you to do the same if you are on a budget. I went there in October which was off-season. I am sure it would cost a little more in the season but still it shouldn’t be too much.

Seriously man, Skopje is a city of “Statues“. You’ll find statues almost everywhere in the city center. but it’s awesome to see too many statues in a small city like that. most of the attractions are located within walking distance in the city center. and I visited the following places in Skopje which I recommend to everyone while in town.

Most of these attractions are located within the city center. I visited all of them simply by walking. and if you are healthy then you can also do the same. You can also take a guided tour if you have money and you like to do such tours but I personally visit places on my own.

I have a video about Skopje which you can watch below to get the real sense of this beautiful city in the Balkan region of Europe. Have fun.

Hi, I'm Abdul. I have been traveling around the world since 2013 non-stop. I'm a full-time travel blogger since 2018 and I'm sharing all of my travel experiences and travel blogging hacks on my blog. Please feel free to Read more about me. 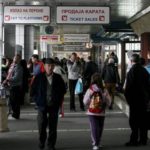 Cambodia Visa for Pakistani Passport & How to Apply Evisa

Travel to Montenegro: I Explored Montenegro Under $60 Budget

Skopje to Tirana by Bus: Road Trip Guide From Macedonia to Albania

Any cookies that may not be particularly necessary for the website to function and is used specifically to collect user personal data via analytics, ads, other embedded contents are termed as non-necessary cookies. It is mandatory to procure user consent prior to running these cookies on your website.